The internet has allowed close protection teams to access vast swaths of information with the click of a mouse. Unfortunately, that is also true for those looking to harm a VIP or executive.

Twenty years ago, a stalker would have a tough time obtaining the travel plans of their target. Today, social media makes it easy to track any individual online.

Moreover, globalization means executives travel more than ever. And oftentimes, this involves visiting unstable regions where conditions on the ground can change overnight.

So how do close protection teams adapt to this new reality?

Increasingly, details have turned to open-source intelligence, or OSINT, to keep VIPs and executives safe.

By accessing the right information at the right time, details can improve situational awareness, proactively spot threats, and respond to incidents faster.

Still, most security leaders fail to exploit OSINT to its full potential. And many organizations don’t consider a potential use case until after an incident occurs.

Which begs the question, “How can organizations fully exploit OSINT for close protection?”

Let’s look at why open-source intelligence has started to play a bigger role in the world of physical security and some practical applications for these techniques.

The Future of Close Protection

A polarized political climate has turned the web into a dangerous place for high-profile individuals. And by extension, this has also created more headaches for close protection teams.

For starters, the public increasingly demands CEOs and celebrities express their perspective on controversial political topics.

No longer can VIPs stay anonymous on the sidelines. Yet the moment they express an opinion, principals can anger millions of people and immediately paint a target on their back.

Would-be attackers have no difficulty uncovering such personal information, either.

In recent years, media outlets have published alarming stories on the Dark Web, which refers to a network of encrypted websites unindexed by normal search engines. Here criminal outfits buy and sell personal data such as usernames, passwords, bank information, and more.

But in our experience at Liferaft, bad actors uncover most of the data they need for attacks right out in the open on the surface web.

Today, anyone with an internet connection can uncover a principal’s basic personal information.

And it only takes minimal research skills to uncover more sensitive data, such as confidential personal addresses, upcoming travel plans, and the names of family members.

Making matters more complicated, most executives no longer work from the protective confines of the office.

Previously, teams could keep a principal safe behind a secured entrance, video monitoring, and trained guards. But today, executives are far more likely to work from their personal residences over unsecured networks.

A threatening post directed towards a senior executive, discovered by Navigator.

Against this new backdrop, close protection teams must now be intelligence-led.

It’s not enough to be the bodyguard waiting to stop bad actors. The growing number of threats and attack avenues means most details struggle to acquire enough resources to keep principals safe.

Instead, protectors must stretch their limited budgets by taking a more proactive stance. This means predicting, preventing, and preparing for attacks/issues before they occur.

Moreover, security leaders must understand the threat landscape across both the physical and cyber dimensions.

This means going beyond securing locations and bodies in the real world. Teams must consider their clients' online identities and reputations in the digital realm, too.

The modern security professional has to see the connection between digital privacy and physical safety. And they must be able to educate a principal on the benefits of taking a proactive stance against online threats.

For example, this could include conducting a client assessment of what information a protectee has exposed online.

This requires going beyond a simple Google search. Teams also must consider other places where personal information could be hiding, such as data brokers, chan boards, alt-tech social networks, and the dark web.

They also have to educate clients on how attackers could exploit this information. And where possible, start to proactively remove such data from publication.

In other words, the modern protector can no longer claim “I don’t use Facebook,” or “I only know how to use my phone for calls.” They simply have to be comfortable collecting open-source intelligence from online sources.

Because while some close protection teams may rely on old-school techniques to keep clients safe, the ‘bad guys’ certainly aren’t.

Attackers could have any number of reasons for targeting a protectee – from kidnapping for a ransom to a romantic obsession.

Here are a few examples of how many teams already use OSINT for close protection.

In practice, however, most modern-day OSINT is conducted online. Users upload terabytes of information to social media each day, so analysts collect the bulk of their intelligence on the web. 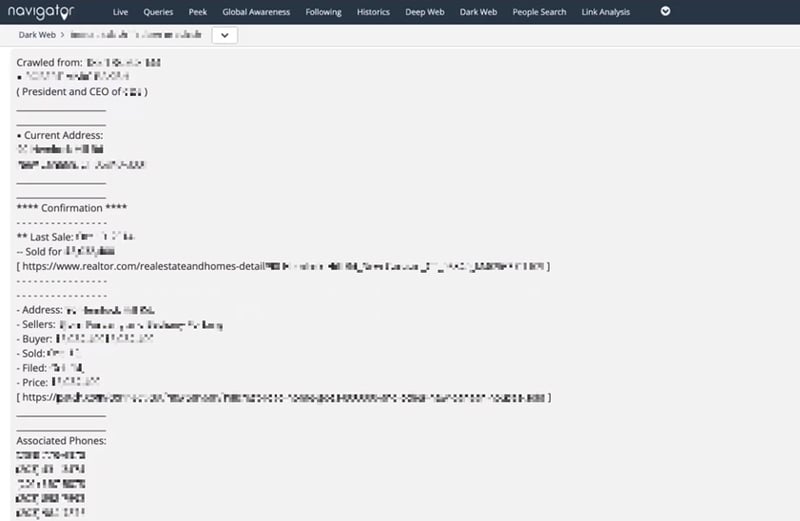 Leaked PII of a senior executive on the darknet, including wi-fi passwords, home address, and family member information, discovered by Navigator.

Where they look for information depends on what they want to find.

Running a simple Google search amounts to OSINT 101. But in many cases, this might be all a team needs to get the job done.

This is especially true when conducting passive surveillance or while performing an audit of public information on a client.

Such OSINT sources often include:

The Bottom Line on OSINT for Close Protection

Open-source intelligence is not a silver bullet for every security program.

Obviously, analysts can only detect potential threats from public information. If a bad actor conceals their activities, they can be difficult to detect.

Additionally, protectors that start applying OSINT can suffer from information overload. And it can be tough to separate valid, verified information from fake news and reports.

Yet, despite these limitations, OSINT still represents a dramatic force multiplier for short-staffed security teams.

It’s far easier to proactively address a threat rather than respond to an incident after the fact. OSINT allows close protection teams to address the growing number of risks to a principal in the cyber realm as well.

All of which can go a long way toward keeping an executive, celebrity, or other VIPs safe.

As a physical security pro, you have a lot on your plate.

Picture these: A political dispute between two employees escalates into a fight. A staff member’s ex-husband shows up at...

The fear of a system or computer crash is daunting not only for individuals but organizations at large. The common cause...