On the evening of Valentine’s day, 2019, Netflix’s Los Angeles office reported threats of an active shooter

Using the search tool to narrow feed results to status of the lockdown. 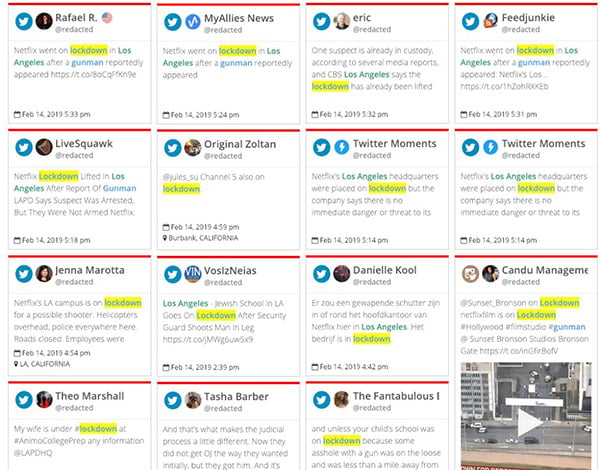 A screenshot of multiple social media posts pertaining to the Netflix shooting scare.

First twitter post about early reports of a shooter at Netflix headquarters at 4:36pm PT, just 1 minute after the police reported to a news agency about the threat.

First report of evacuating the Netflix office came from Twitter at 4:44pm PT

Multiple nearby Twitter accounts disseminate news of the reduction in threat status at 5:09pm PT

LAPD informed news channels that the lockdown had been lifted, as a suspect had been arrested and no shooter was ever on the Netflix premises – 5:35pm PT

As this event summary demonstrates, news in a crisis is often socially shared before it is officially announced, meaning companies in surrounding areas can have more information, sooner, to ensure the safety of their staff and executives.

For years, the dark web has served as a hub for criminal organizations online. But increasingly, these nefarious individ...

A Podcast on Social Engineering

A Podcast on Social Engineering

Disinformation campaigns have historically represented a headache for nation states. But in recent years, threat actors ...